In many houses before television there used to be a ‘dressing-up drawer’, full of fancy dress outfits and discarded clothes to amuse bored children on wet afternoons or winter evenings. The drawer was an open sesame to the imagination – a box of tricks, a tombola, Father Christmas’s sack. Then television arrived and the drawer was closed. The actors became the audience, information replaced imagination.

Painting today seems like that drawer. Historic show after show astonishes and reminds us of the art’s inexhaustible potential, but in practice painting is either disregarded or so restricted by a defensive fear of content that its metaphorical riches remain shamefully neglected. For 20 years Stephen Farthing’s painting has been a shining exception.

He has bucked the trend, not from contrariness, but a combination of humour, enquiry and a commitment to being a painter in the progressive tradition of Modernism. His first variation on a portrait of a monarch, a reworking of Rigaud’s Louis XV, was done in 1975 during his final year at the Royal College of Art in London. At that time painting was pronounced dead even by a senior curator at the Tate Gallery; among students it was tolerated only in the form of minimal abstraction. Since then it has enjoyed a revival, the 1980s vogue for Expressionism currently succeeded by flashy abstraction. Meanwhile, Farthing has returned to the theme of royal portraiture. Considering how the Royal Family has dominated the news, it is odd his subject should still appear eccentric. 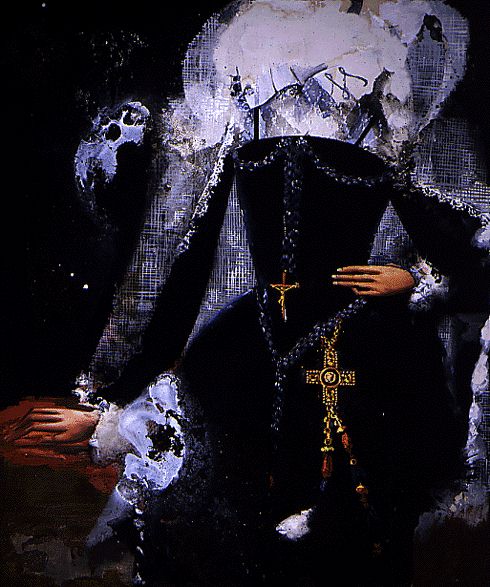 Farthing is a long-standing admirer of Balzac and ‘The Unknown Masterpiece’ prompted much of the thinking behind the monarch series. Louis XII of Austria is after the portrait by Frans Pourbus, the painter portrayed in the novella; and Cultured Pearl, after a portrait of Henri IV, follows the description of the ‘masterpiece’ in the story by leaving everything to the imagination except the subject’s feet. Two quotes from the book have particular relevance. ‘The mission of art is not to copy nature, but to express it! You’re a poet, not a simple copyist!’ and ‘A hand does not belong only to the body, it expresses and continues a thought which must be seized and rendered.’

Farthing’s ‘monarchs’ are not copies, they are imaginative explorations; and he focuses on the hands, having “chopped off” the heads. The head is inevitably the focal point of any portrait; by ridding himself of it he brings attention to bear on the painting as a whole. Hands point to handiwork. Painting at the moment is fashionably a hands-off activity of spinning, spraying and dripping. Farthing uses hands-off techniques like flooding but also a full range of the traditional easel-painter’s skills, from trompe l’oeil details with the brush to spreading the paint like butter – in wry acknowledgement of Disraeli’s advice: ‘Everyone likes flattery and when it comes to Royalty you should lay it on with a trowel.’ Early portraits are as simple as pub signs in their decorated flat colour; Farthing’s elaborations reflect the thinking of our complex time.

His portraits can be divided into two groups. In one the figures are clothed but disembodied; in the other it is the emperor’s new clothes. Their naked bodies glimpsed through the decoration on their garments. The disembodied group of Elizabeth I, Mary Queen of Scots and Henrietta Maria are more interpretative. Elizabeth and Mary are in striking contrast, the difference metaphorically expressed even in the handling of the paint. The jewels on Elizabeth’s dress suggest the majesty of the night sky, whirling planets and starry constellations; but she is also part of the map at her feet, since Farthing blends handfuls of Oxford mud with the paint. Elizabeth was both the Faery Queen and Good Queen Bess, ethereal and earthy. In 16th-century portraits she figures as a concept, an idea of regality. He was surprised to discover the design of the ‘Ditchley’ portrait in the National Portrait Gallery was made to the specifications of the Court’s head of propaganda – shades of Saatchi and the Iron Lady.

By contrast Nicholas Hilliard’s miniature depicted Mary as a character. Farthing’s titles convey the difference. She Could but Does not in the case of Elizabeth; Oyster Catchers c.1610 for Mary a declamation and a wistful analogy, emphasising the dominance of one and the deposition of the other. The oyster catcher analogy stems from Mary’s sombre black and white clothes, but for Farthing there is a Scottish connection – it was in Scotland that he saw the bird and heard its melancholy call. The oyster catcher frequents the tideline, fit symbol for a marginalised Queen. Farthing runs the paint to the margins of the canvas like the tide up a beach; but there is no intentional nostalgia. He admires monarchy for its eccentricity and the amusement its excesses provide – ‘Roman history without the emperors would be very boring’ – and deplores the drabness reflected by the contemporary royal portrait: ‘Lounge suits replacing pearls, half-length pussy-cats instead of full-length tigers. Sickert did no favours putting them in working clothes.’ How much more interestingly kings were dressed in the days of Louis XIII of Austria with his slashed doublet, a wildly fetishistic garment beyond the dreams of Vivienne Westwood. The cycle of fashion has returned to chains and rips, but now it is everyman and not the king who wears them.

Farthing’s portraits intentionally place the viewer at a disadvantage – looking up as befits a doglike subject. In emphasis the only heads which appear in the series are those of the hounds milling expectantly around the feet of Anne of Denmark in As if Hunting c1617. Their expectation turns the pearls of her dress into miniature thought bubbles. They are subjects, just as Henrietta Maria’s dwarf and monkey are accessories. Power, of course, is erotic. Henry VII is a swordsman in more ways than one! And in Margareta of Austria, A Tabular Lattice, the exposed pattern of her dress has suggestion of frenzied fingers caressing naked flesh. Forget art, the sensation of the last Venice Biennale was Princess Di’s unwaxed thighs.

In The Knowledge, his series of urban panoramas, Farthing has explored the topography of famous cities. He regards the monarch series as another kind of map-making. The idea was reinforced by the sight of aboriginal art on a recent trip to Australia mapping which moved from one space into another, the physical to the intellectual. Perhaps this negotiation of form is analogous with his job as Ruskin Master in the politics of labyrinthine Oxford! The monarch pictures function as physical journeys in close-up, operatic spectacles from a distance. But what matters most is their restatement of the relevance of painting as a mode of expression, and of content as inseparable from form. It is after all in their dependence on metaphor that monarch and subject, art and science, share common ground.