I’m one thousand seven hundred and forty nine miles or three hours and a half hours out from Kennedy Airport. On the map St. John’s in Newfoundland is straight ahead and Godthab in Greenland is north and a little to the west, they are places where the Atlantic ends. Right under the image of the plane are the words Atlantic Ocean with a lot of the colour blue around them.

There are a surprising number of ways I get to see the Ocean, but the four most frequent are as follows. Today and quite often I see it through the not very clear plastic of an airplane window. heading west against the jet stream at about 35,000 feet on a day flight from London. Today like most days when its not under the clouds it looks big and frozen with no real detail but its slowly changing colour. 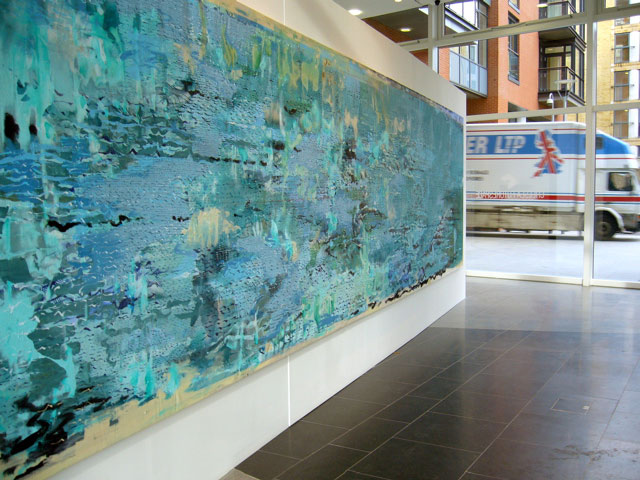 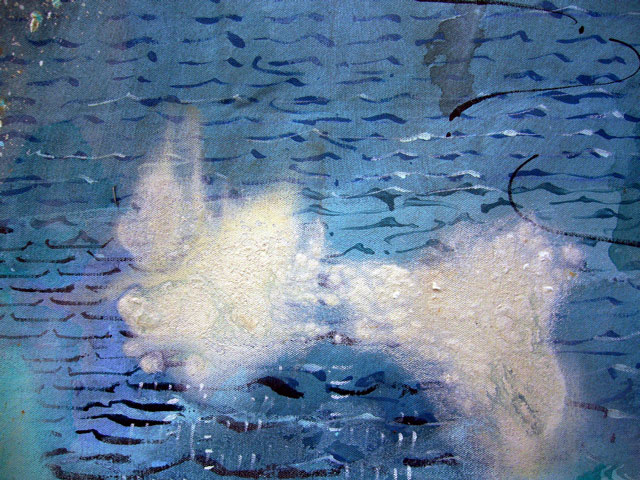 From Amagansett and Montauk the ocean is big, active and is seldom at rest and in the winter especially changing colour every few minutes.

My third and probably most degraded view of the Ocean is from the embankment at high tide on Millbank, where I like to think some of that water between the banks of the tidal Thames has leaked from the Atlantic to help salt up the fresh water coming in the other direction from Lechlade. The fourth is the view I have painted over the past year in my studio next to the Thames at Pimlico.

I started the painting imagining I was looking north with the Hudson and Manhattan on my left and London and the Thames on my right, then realized the rivers and cities no longer occupied my mind and I was in fact only interested in painting the stretch between the edges. My goal was to invent from fragments, without direct reference to dry land, drift wood or shipping an epic image of the ocean.

On completion I realized that because of it’s size and insistence on detail there was very little point in an audience trying to make sense of it from reproductions, to get the point I realized they needed to stand in front of it, walk it’s length and get the feel of it close up.. So the catalogue explains the painting with details and words there is no picture of the whole thing other than the one you get if you see it in the flesh or read the words and look at a few details and samples.