Painted at a time when the British royal family is under constant attack, Stephen Farthing’s new series of paintings serves as a reminder of the role of the monarchy in English history and of the veneration, fear and pity that monarchs have instilled. The timing of the series is crucial, as crucial as the problems of the Royal Family itself.

(That in Farthing’s portraits both sovereigns and their intimates are headless could be construed as an emergency signal.) Is symbolic decapitation a reminder that in the past – but not only in the past – the Royal Family was under constant threat of death? Could it be a device for emphasising lineage rather than for focusing on individual family members? Could it be a reference to that trophy which enemies craved most and displayed ceremonially at public executions, the head being the symbol of life itself? Or is Farthing reminding us that in 20th century terms no verifiable images of these people exist? 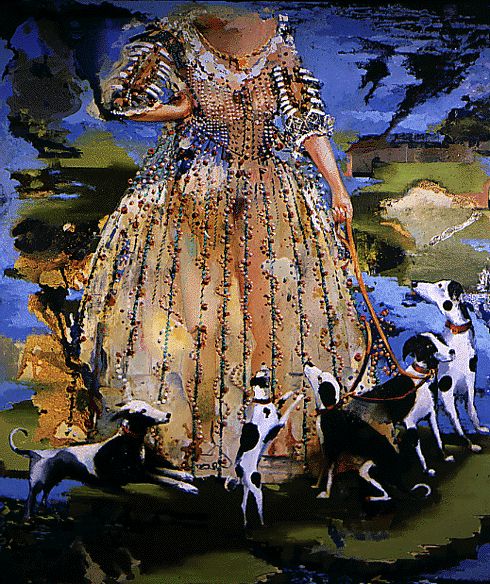 But lack of knowledge is not the problem. How little we would have gleaned even if we had been present in those museum-like rooms stuffed with booty. First, we would be forbidden access to the monarch, a situation Farthing impresses on us by a variety of serious jokes about alienation: images glimpsed through what resembles interference on a television screen, for example, an effect which also refers to current art techniques – Gerhardt Richter’s flickering effects, like the signal on a poorly tuned television set, or Sigmar Polke’s ectoplasmic runs of paint… but for every reference to the present, there is another which serves to return us to the past.

Indeed, some of Farthing’s devices fall exactly between the two: that sense of sheer prettiness associated with Tudor England, for example, as when a beautiful woman rides across the canvas, holding the reigns of her horse demurely while wearing nothing more than diaphanous fabric with a design of interlinked crowns. During the Renaissance, such intricacy of pattern-making and technical facility were greatly admired. Why then is Farthing taking it over at this particular moment? Because for him, emulation equals homage? Or could it be a way of ensuring that his own painterly virtuosity is not overlooked? Perhaps the hubris of the painter is fuelled by the danger of the lives of the figures he paints.

Heaving under the weight of symbolism, Royal portraits have to do with power. politics, above all survival. Offering constant choice between looking at or looking through, a portrait of Henry VII shows him vulnerable, ragged. Despite his heavily curtained, deeply carpeted room, crammed with treasures, he still seems deserted. He may even have taken leave of his senses.

If he were any other monarch, at this moment it would be Shakespeare’s Lear, railing in vain against the elements. But at least Lear had his trusty Fool for company. Resembling an imprisoned war criminal rather than a beneficent ruler, Farthing’s Henry seems confused, unfocused, profoundly lonely. Similarly, Louis XIII of Austria is lost in admiration of his own reflection, however, he should stop to ponder the blackness of the space inside: a premonition of doom, execution and the oblivion that lies beyond, but also the negativity of the present. ‘Qui s’lve, s’isole…’ How alienating to exist as a symbol but for that symbol to extend beyond your control. Elizabethans knew that, and recognised that it is in the nature of symbols to do so. How futile to try to think independently when myth surrounds you even during your own lifetime. At the dramatic height of Anthony and Cleopatra, the Egyptian queen (acted of course by a boy) damns those very boy actors who in future will play her badly, in ‘the posture of a whore’.

One reason for the decline of the Royal Family could have been money; only recently have historians researched the bankruptcy which beset heroes like Sir Philip Sidney. (Later, James I, no economist, confused British and Scottish money until his chancellor corrected him.) But money alone was not the point. For from the Middle Ages onwards, despite famine or grave poverty, rulers seemed dedicated to the pursuit of magnificence for its own sake, as lavishness and a sense of self-worth were deemed identical. (Only in the 1980s in mainland Europe and the U.S.A., a period Farthing quotes wryly, is it possible to find a comparable situation.) Play between poor and rich, high and low, ideal and bastardised, has a special function in Farthing’s analysis of monarchy, since each of this series derives from an existing painting and many of the paintings which were his sources were included in Dynasties, the Tate Gallery’s exhibition of early English masterpieces held in 1995.

Refreshing his memory by consulting the reproductions in the catalogue, Farthing selected paintings from that exhibition, making excisions and additions as he went, exaggerating in some places but not in others and, it seems, striving to keep an open mind. Yet there is a more loaded term for the frame of mind he entertained. Only reverie accounts for the constant differences of focus and handling, the operations of the brush, ignoring certain features while emphasising others. The result is patchy, as memory – even perception itself – so often seems.

As time passes, only particular episodes remain vivid – some uncomfortably so – while others can never be recalled, however much we wish them back, hence the lattices, the play with ideas of concealment, the jewelled surfaces, all doing that nightly work which Sigmund Freud described: a task of editing, in order to maintain mental equilibrium, which was the function of dreams. So if the visions of archetypal kings and queens summoned up by these paintings serves a purpose – like the thousands of people who write letters to the Queen every month – that purpose involves personal power or its lack. Only be establishing some sense of the forces that restrain us is it possible to escape them.